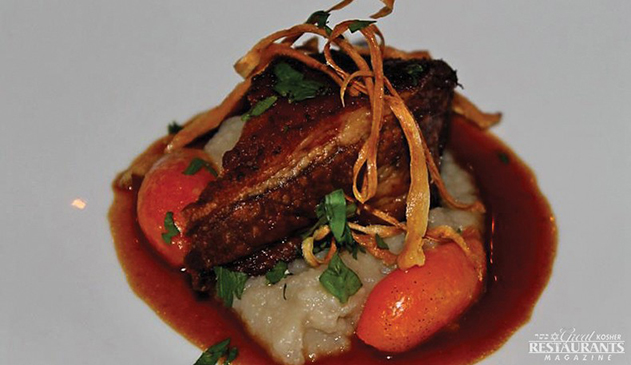 1. Heat a large pan (big enough to hold the meat but not too big) with some oil and sprinkle the
lamb breast with pepper.
2. Sear the lamb fat side down until golden brown.
3. Remove the lamb from the pan and put aside.
4. Pour off some of the oil and add the vegetables the fruit and the rosemary and saute until soft, 15 minutes.
5. Add the lamb back in and pour in the stock to cover 2/3 of the lamb.
6. Bring to a boil and then lower the flame to low-medium and cook for about 3 hours until a knife slips through and pulls out of the meat easily. Remove the meat from the pan and allow to cool. Remove the meat from the bone.
7. Cut into 6 pieces and put aside.
8. Skim the fat off the top of the sauce.
9. Puree the sauce and add salt to taste if needed.
10. In a small saute pan add some of the sauce and glaze the meat. Another option is to sear the meat on both sides in the pan and serve the sauce on the side.