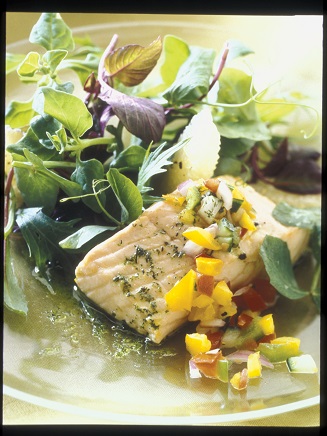 
1. To make the dill oil, bring 1 quart of lightly salted water to a boil in a large saucepan. Plunge the entire bunch of dill into the boiling water and cook for 5 seconds, just to set the color. Drain and rinse under cold water. Blot the dill dry with paper towels. Process the dill and oil in a blender until smooth.Transfer to an airtight container.The oil can be made up to 5 days ahead, covered and refrigerated.Return to room temperature before using.

2. To make the confit, combine the oil, peppercorns, garlic, and bay leaf in a 12- to 14-inch skillet. Place the salmon in the oil, being sure the fillets are barely covered with the oil; add more oil as needed. Turn the heat to medium. As soon as the oil begins to bubble around the edges ofthe salmon and the surface of the salmon turns opaque, remove the skillet from the heat.

3. Cool the salmon in the oil, where it will continue to cook. Using a slotted spatula, transfer the salmon to a platter and cover tightly with plastic wrap. Refrigerate until chilled, at least 2 hours or up to 1day.

4. To make the relish, combine the grapefruit pieces, red and yellow tomatoes, cucumbers, green, red and yellow peppers, onion, and jalapeño in a medium bowl. Toss with the oi land season with salt and pepper.Cover with plastic wrap and refrigerate until chilled, at least 30 minutes and up to 6 hours.

5. To serve, place a mound of greensin the centers of each of 6 plates.Top each with a salmon fillet. Placespoon about 1/3 cup of the gazpacho relish on each filet, allowing some to drip down the sides of the dish.Drizzle the salmon and greens, as well as the plate, with a tablespoon or two of dill oil. Serve chilled or at room temperature